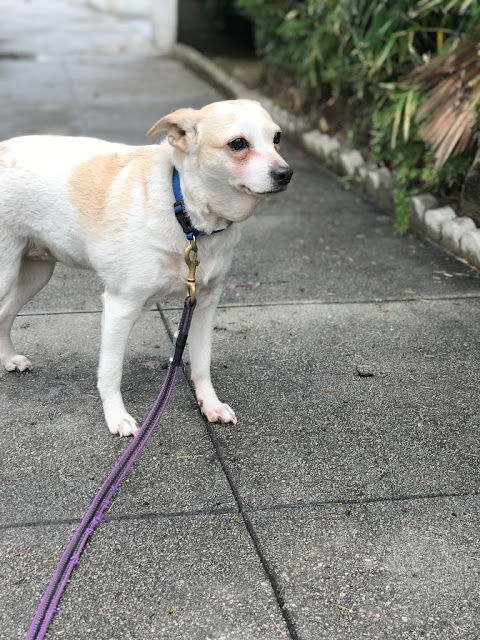 So, it's been a while, but I'm back and recommitting to this blog that no one reads. I'll post weekly on Mondays from here on out (hold me to it please).

This blog isn't about anything per se, so as with before, I'll be writing about whatever strikes my fancy--recent news items, book reviews, movies I've watched, thoughts I've had, attempts at personal growth, and other miscellany.

The biggest thing on my mind at the moment is, without a doubt, my dog Virginia Woof (Feel free to berate me for this. I live for your bad-pun groans) and her very near death experience about a week and a half ago.

I adopted Ginny about six years ago, and while her exact age is unknown, she grew a couple of inches taller in the months after I got her, so it's safe to assume she's about seven now--pretty young for a small breed dog.

So anyway, Ginny was feeling a little urpy a week ago Thursday--vomiting and refusing food, normal dog-with-a-stomach-bug stuff--so I took her to the vet, expecting them to give her some fluids, maybe prescribe an antibiotic, overbill me, and send us on our way. Instead, I learned she had a gallbladder obstruction and that the organ was likely minutes away from bursting (think appendicitis), causing sepsis and imminent death.

Nine hours later (we ping-ponged between a couple different emergency rooms), Zeke and I had drained our emergency fund, maxed out our credit cards, and Ginny was floating in anesthesia land while a surgeon prepped her for a surgery we were told she had 50/50 odds of surviving. I was fairly certain she wasn't going to make it and spent the majority of the night beginning the grieving process--and trying to fathom the $10,000 in credit card debt we'd just acquired (which would balloon to $18,000 once we picked her up and paid for the remainder of the surgery and her five days in hospital).

But then the unlikely happened. The surgeon called to say that Ginny had not only made it through the surgery, but had done so with no complications (though they made it clear to us that she wouldn't be completely out of the woods for another 48 hours).

And then she made it through her hospital stay, a feat on which the surgeons placed slightly better odds of 70/30.

And now, she's laying next to me as I type this, staring up at me with dramatic squirrel face, wondering why she's not allowed to eat anything other than low-fat super-bland GI food.

They told us her gallbladder was already beginning to rupture as they removed it--Zeke is convinced the surgeon tossed it across the room like a live grenade--that there had been no time to spare.

Was it fiscally responsible to take on nearly $20k in high-interest debt when Zeke and I have spent the last two years singularly focused on getting out of debt? No.

Was it worth it? Hell yes.

The entire experience has left me mentally, emotionally, and financially depleted, but I wouldn't do a thing differently.

I'm not naive. I know dogs die. But I wasn't ready for this particular dog to die--not even a little bit--and when the ER vet with the terrible bedside manner said, "We can either call the surgeon or we can bring Virginia back out to say goodbye," fiscal responsibility was the furthest thing from my mind.

So here we are, back at the bottom of our debt pit (insert Sisyphus reference here), but with a lot to be grateful for. We can look forward to many more years of Ginny falling asleep on our chests as we watch TV. Our friends have pitched in over $4,000 towards her medical bills (a fact that genuinely makes me tear up with gratitude when I think about it). We had paid off enough of our debt to be in a position to put her surgery on credit cards (This is both an inspiration to redouble our efforts and get back to where we were before this emergency undid all our debt progress and a consolation of sorts--all that work wasn't for nothing, because if we hadn't done it, we wouldn't have had the financial wiggle room to save Ginny).

Besides, Zeke and I have already come very close to getting out of debt. We know how to do it now, even if the finish line has moved a few miles forward. And considering the only thing we're interested in doing these days is staying home and cuddling our dog, it shouldn't be too hard to save up.